Tabernacle of the Visitation 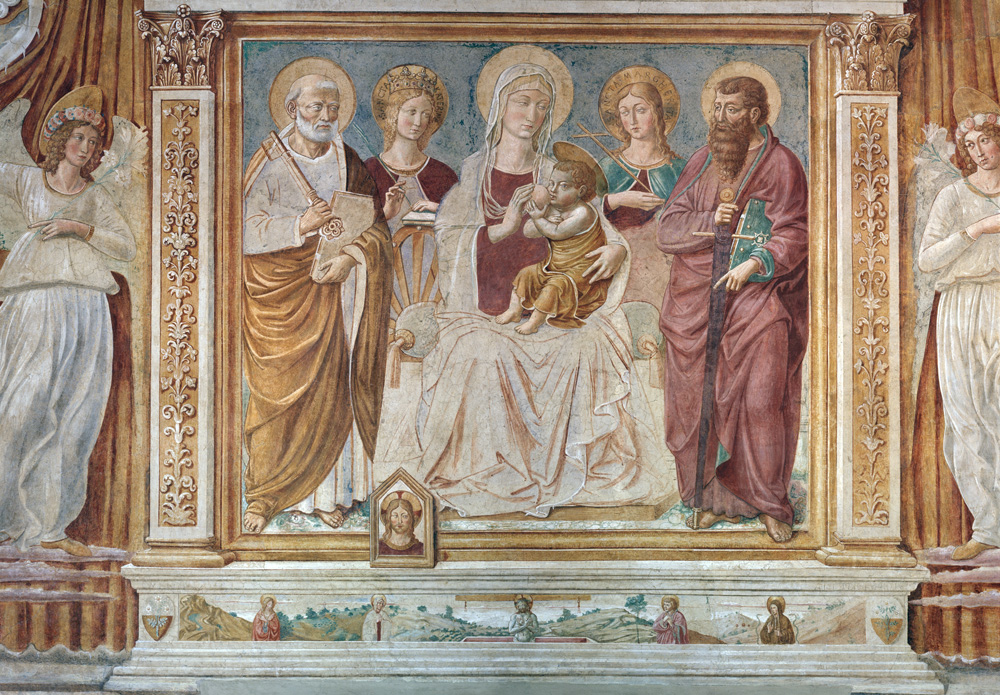 Tabernacle of The Madonna of the Cough by Benozzo Gozzoli

In 1484 Benozzo Gozzoli and his faithful collaborators painted the precious Tabernacle of the Madonna of the Cough in a chapel at the junction of the road to Castelnuovo, and the beginning of the road that leads up to the small village. Frescoed with the episodes of The Funeral of the Virgin and of the Assumption of Mary, it became known as The Tabernacle of the Bad Cough for the devotion that local people showed to this chapel. They would go to pray in order to avert the risk of pertussis, an illness prevalent amongst children and very dangerous at that time, which we know as 'whooping cough'.

We know that it was commissioned by the prior of Castelnuovo, Messer Francesco Grazia due to a fragmentary inscription on the false parapet of the altar. The work was undoubtedly appreciated so much that, a few years later, in 1491, Benozzo returned to Castelfiorentino to complete a new pictorial cycle: the frescoes with the Stories of the Virgin of the Tabernacle, known as The Visitation.

In the central wall the painted trompe -l'oeil altarpiece is very effective. The Funeral of the Virgin occupies the right wall. Mary lies on the catafalque, surrounded by the twelve Apostles and accompanied by angels. In the centre, Jesus holds the soul of his Mother in his hands. In the foreground, the patron, Grazia, is shown, kneeling in front of Mary's body, followed by two young men whom recent studies have shown to be probably members of his family. On the left wall The Assumption is interpreted according to the Golden Legend by Jacopo da Varagine. It also shows the episode of the Madonna when she throws her belt to St. Thomas.

The frescoes of Castelnuovo, like those of Castelfiorentino, were, over time, subject to innumerable episodes of decay. In 1853 the front façade wall was demolished and a new façade was built in a recognisably fifteenth-century architectural style, intending to save the structure. Also, at this time, the altar was removed and the painter's signature was discovered, still visible today, under the fake altarpiece.

These restorations did not however prevent the deterioration of the frescoes caused by quite extreme dampness and so in 1970 the Florentine Superintendence deemed it appropriate to proceed with the removal of the paintings and to carry out careful restoration work. The detachment did not reveal sinopias, or preparatory drawings, and for this reason it was assumed that the painter had preferred, to transfer the design using a more 'modern' technique known as spolvero or 'pouncing'. In 2009, as the frescoes were being installed in the new museum, the sinopia of the Madonna Enthroned with the Child was discovered at the chapel of Castelnuovo.